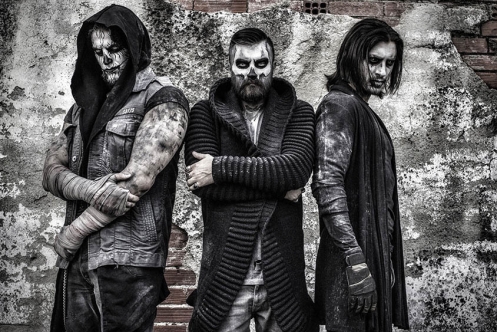 Brought to life by the devious minds of the multi-instrumentalist and producer Alessio NeroArgento (already active with his main band NeroArgento besides being involved in many collaborations worldwide as a producer, arranger and musician) and vocalist Claudio Ravinale (known for being the voice of anger of the death metal institution Disarmonia Mundi the horror metal act 5 Star Grave) "The Silverblack" is an industrial metal creature that quickly developed its own malicious sound, spitting out extremely catchy industrial metal tracks, mainly keyboard-driven and supported by a wide range of vocals (from goth deep voices to extremely irate death metal shouts) featuring both sharp and aggressive passages and more atmospheric and eerie moments.

After releasing the self-titled debut album in 2014 via AExeron Media/FiXT divided into five monthly episodes of two songs each, the band quickly recorded 11 brand new tracks (produced as usual by NeroArgento at AExeron Studios) for the second album entitled "The Grand Turmoil" released via Sliptrick Records in autumn 2015.

"The Grand Turmoil" hah been praised by both critics and fans worldwide for refining further the band's formula melting together industrial beats, rot'n'roll assaults, gothic parts and metal onslaughts, sharpening and enhancing to a higher degree the already unique band's venomous sound.

After releasing a more experimental electro-driven ep entitled "The Industrial Chapters" under the monicker "The Silverblack Dj-Set" and the stand-alone single "Alone" (both via Reload Music, powered by Sony Music Italy) the band finally completed the production of their third official full-lenght album "Rain On A Wedding Day". The album, scheduled for a late 2018 release via DarkTunes Music Group, represents "The Silverblack" at their darkest ever, combining the usual industrial metal approach with a more melancholic and goth rock-driven sound, shaping lonesome eerie soundscapes like never before. The vocal textures are as usual extremely multi-layered while the lyrical themes deal about negativity, decadence and the complete loss of hope, representing a faithful mirror of the times in which we are living.