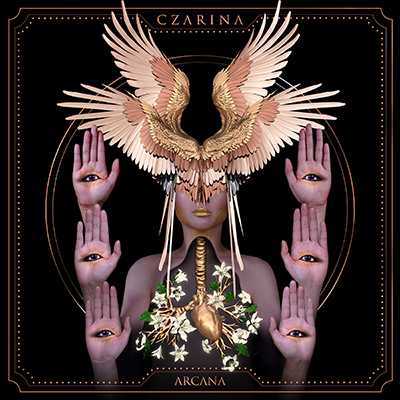 Galicia, Spain-based New York native and dark electro artist, CZARINA (styled as C Z A R I N A on all platforms) has released her latest visuals for Progressive Gothic Rock Track, “Excelsior” on German gothic label darkTunes Music Group YouTube Channel. “Excelsior” is the 4th track in her latest full-length album, Arcana, which was released in February of this year. “Excelsior” takes listeners to new heights with tantric polyrhythms, odd meters and eclectic vocal, guitar and drum performances by the artist rendered into one continuous, giant crescendo crashing wave upon wave. Listed as one of the Top 25 Synthpop Songs of 2022 (So Far) on SynthpopFanatic.com, esteemed music journalist Chris Brandon raves that the song is “all skittering histrionics that topple through genres, while CZARINA provides a masterclass in vocal gymnastics. Her rhythmic chant is unlike anything I’ve ever heard.”

Directed and produced by CZARINA and her husband, DeadlyKawaii (together working as a creative powerhouse known as “The Kitsunes”), “Excelsior” was filmed in their coastal home in Costa Da Morte in Galicia, featuring epic seascapes, the regions’s natural raw beauty and the artist’s untethered, multi-faceted performances. CZARINA, who is a devout pagan and Animism Plus mystic, weaves emblems of her spirituality and culture within all her work and artistic universe.

”Excelsior” and all original songs in Arcana were written, composed, arranged, performed, recorded and produced by CZARINA. Von Hertzog (VHxRR, Information Society) of The Social Club (Reading, PA) served as Co-Producer, Mixing, and Mastering Engineer. The album art and all visuals were created by DeadlyKawaii and CZARINA together.

Get the limited deluxe digipak (including 12 Arcana cards) and the bundle with an exclusive t-shirt, download or stream the album now on: