DUST IN MIND LIVE AT THE OPERA

Dear metalheads, we are extremely proud to present you the new Dust In Mind live album "Live At The Opera"! The band recorded it in one of France's most beautiful opera in Strasbourg. Enjoy and share it ❤

The members of AEVUM from Italy and France have, since their foundation in 2012, developed a musical style that always was bound to their strong influences of Symphonic Metal, yet breaking the bonds of the genre, by thinking outside of the box.

Get the new album MULTIVERSE as digipak, collector bundle or download  and stream here:

Our bass monster Basszilla and our darkpop queen Maria Mar of Omnimar joined their forces to create a new masterpiece!

This song is called "Ghost In My Head" and comes with a wonderful music video which has been recorded in 3 countries: France, Germany and Russia!

This song will appear on BASSZILLA's new double album "Support Your Local Apocalypse Dealer" and of course this first single is OUT NOW!

THE BLACK CAPES are back! New single & videoclip OUT NOW!

The Greek goth rock act THE BLACK CAPES return with their new album "Lullabies For The Dead" on April 10th. !!! And here is their new single & video "And I Wait". "Lullabies For The Dead" drives the band down a more traditional goth path, in the vein of THE SISTERS OF MERCY and FIELDS OF THE NEPHILIM, while at times flirting with the heavier sound of TYPE O NEGATIVE and THE 69 EYES.

You can preorder the album as digipak or download here: 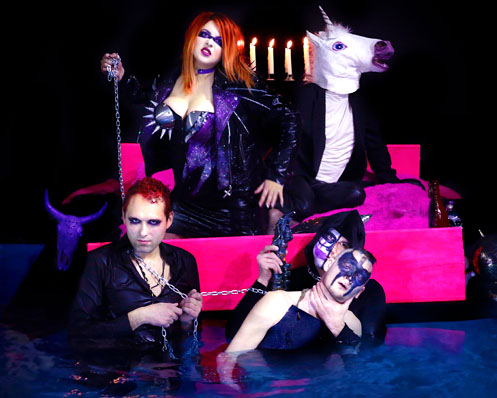 A BRITNEY SPEARS cover in industrial rock style? Ooops, FREAK INJECTION did it (again). Enjoy the great music video "Toxic" and be ready for a really really good debut album on April 24th.

Don't forget to preorder the album and one of our 4 limited collector editions here: