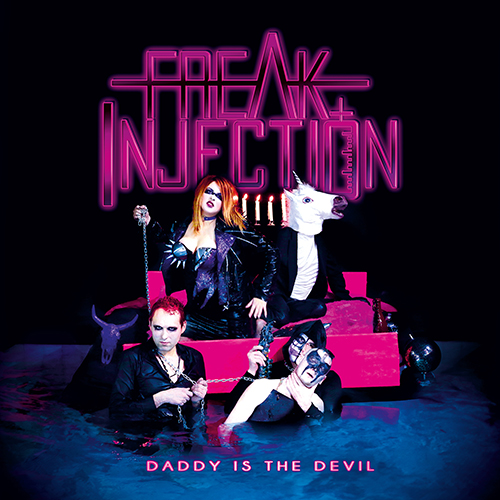 Let’s introduce the band. The composer, Mac-F, air guitar and dog masks fan. The Diva Duchess, Charlie Red, addicted to spike jackets. A cat raised by sharks addicted to sub frequencies. A cute mogwai that mutates to a devilish gremlin hitting frantically its drums. From their mystic encounter on a full moon night is born FREAK INJECTION.

After their first single and acclaimed video “Psycho” (Arte Tracks: Greedily Psycho; MyRock magazine: what a crashing show!), FREAK INJECTION issued during summer 2017 its first EP “Freak in Fashion”, a hybrid pop-rock-electro piece of art. Rock & Folk magazine fully got the concept and branded the band as “sulfurous elegance”. Since then, the band has played many live shows for their “Evil Raccoon Tour”. Their shows have shocked people with heavy beats, unicorn inspired riffs, crazy dancing raccoon and flying plastic pink flamingos. In 2018, FREAK INJECTION opened for Belgium electro combo VIVE LA FÊTE and for cult industrial band MINISTRY in Bordeaux.

Indeed FREAK INJECTION is above all a live band, with a show embracing freaks of all kinds, referring to ambiguous performers like DAVID BOWIE, aliens and their sex friends, pink blood and kawai unicorns. The music is inspired by THE PRODIGY, NINE INCH NAILS, DIE ANTWOORD, NINA HAGEN, MADONNA and MARILYN MANSON. Even if the band reckons some help from some cosmic entity, with the ambition of playing in a galactic concert, their sound has already reached outside of France: live show in Belgium, radio play in England and Italy, articles in the Dutch and German press. The Freaks have even got a nice message from Richard Patrick, guitarist of the American band FILTER: «Holy Shit, look at this video! You guys are awesome ».

You can get the album as limited digipak, stream, download or in one of our 4 limited collector editions here:

Our Greek goth rock act THE BLACK CAPES returns with their new album "Lullabies For The Dead" which includes this amazing cover of the hit "Rain" of THE CULT. Enjoy!

You can get the album as digipak, stream or download here: 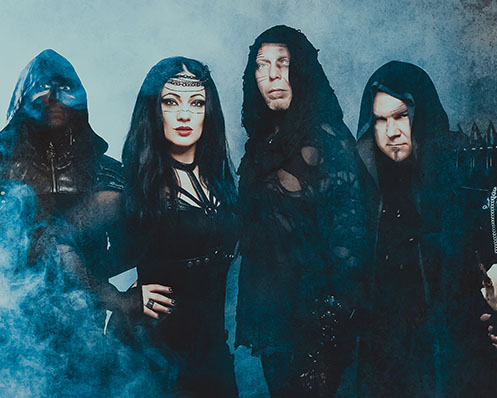 Ladies & gentlemen, let us present you our new signing made in Germany! TOAL joined the darkTunes family!

We're going to release their new EP "Trapped Heart" next Friday (April 24th.), but first, let us introduce you the band:

Dark synth soundscapes caress her body, pumping basses break the silence, the deep beat of the night accompanies her every step. The heartbeat of longed-for liberation throbs in her chest, waiting to break the chains of emotional captivity. Luzi Lacole's fiery voice ignites the longing for a common path, a new beginning, a campaign against mechanized petrifactions. TOAL's multi-faceted style can be classified into three differing genres. A mystical-spherical NewAge ambient mix meets dark post-apocalyptic end-time industrial. Varying TOAL refine their sound landscape partially with Dark Electro, Dubstep and Witchhouse influences. The musical origins of the individual band members allow the listener enormous scope for their own interpretations due to their individuality. In short, the songs deal with the reality of the soul, with the longing for being alive, for truth and for hope. TOAL started in autumn 2017, when the 4 musicians met for the first time.

The musicians from Braunschweig and Herford didn't know each other well yet, but the search for alternatives to their current projects gave the joint impulse. It was about time to create something with their music, to share something, to be able to change something. Luzi Lacole, who trained as a vocalist with Mina Harker and Clemes Bahn, among others, has been playing in a gospel choir and various rock cover bands since 2009. She successfully entered the electronic music scene in 2017 as keyboarder, dancer and singer of the band SynthAttack. Rob Gee and Oak, who have already been live in various bands for years, already knew each other from a joint project. Rob Gee supported the band as keyboarder and guitarist until the end of 2018. Oak is still a permanent member of the band as drummer and bassist. They also support another electro project as live keyboarders, drummers and back vocalists on stage. Tian has been playing drums in various rock, pop, soul, jazz and electro bands since 1989. He has been working as a professional musician and drum teacher since 2010 and has been gaining experience with electro bands since 2008.

We're going to release their new EP "Trapped Heart" on April 24th. You can download it here:

You can get your collector bundle with limited shirt, hand signed autograph card and digibook now exclusively on our shop DARKMERCH:

Or get the digital album on iTunes, Amazon, Googleplay, Spotify or Bandcamp:

Dear dark electro and industrial freaks, SUPPRESSOR is finally back with his new album "Into A Deep Void"!

This album is a great mix of electro industrial, dark electro, psytrance and shamanic beats. Play it loud and enjoy!