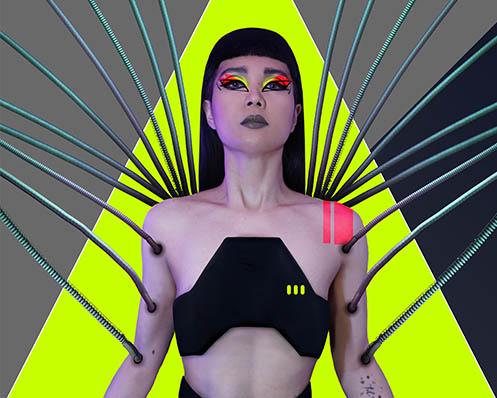 Ladies & gentlemen, we are very excited to announce that C Z A R I N A joined the darkTunes family!

CZARINA ® (styled as C Z A R I N A) is Vero Kitsuné - an American award-winning synth and electronic artist, songwriter, producer, visual artist and filmmaker based in Galicia and London. Her work transcends a vast spectrum of electronic genres including progressive synths, industrial, dark trip hop, electronic rock, post-punk and darkwave.

CZARINA is an established fashion and accessories designer, and she co-runs the creative branding powerhouse for art, design, photography, film and music called THE KITSUNÉS with DeadlyKawaii. She is also an active wildlife, marine life and ocean advocate.

You can discover the debut album "Painted Holograms" of this amazing artist now on:

We also invite you to watch her award winning music video "BLAZE: Dances of the Yokai [The Tale of the Assassin and the Samurai]" below, which already won the NEW YORK FILM AWARDS 2019 (best music video), the INDIE SHORT FEST 2019 (best original song, best makeup and hairstyling) and which were nominee at the INDIE X FEST 2019 (best costume design and best makeup and hairstyling) such as semi-finalist at the LOS ANGELES FILM AWARDS 2019! Enjoy and welcome C Z A R I N A