One, two, three and four – new EXTIZE album at your door! An electrifying musical tribute to the most iconic horror and sci-fi movies! "MonStars will be released on September 30th. But don't worry, EXTIZE will release a new single and video of this album each month till the album release. The first single "Pinheadbanger" and its music video will be released next Friday.

Welcome to the MONSTAR(S) party of the year, kickstarted by the one and only dreamboy Freddy Krueger and his darkwave anthem! The dancefloor makes room for the xenomorph queen of this evening and her cyberpunk dance, followed by the beloved wasteland warrior Mad Max who’s here to spill some fuel and light the scene up! Anyone brave enough to ask cyberpunk chick Carrie out? Don’t worry, she doesn’t bite. But she might set you on fire. Not to mention that every good party needs great entertainment and ours appears to be a clown from Rob Zombie’s ‘House of 1000 corpses’! Show them your smile Captain Spaulding! Who’s that little girl dancing to industrial techno, you ask? Come closer and I ‘m sure that our little Esther will introduce herself…

The gates of the underworld open for our ‘Hellraiser’ celebrity guests who arrive with a dark electro ‘Pinheadbanger’ to keep you rocking out! The mic gets taken over by Ash from Evil Dead who is telling a story about the Necronomicon! If you spot some zombies after that, just ignore them! Need a break? You can visit the ‘Blair Witch’ in the forest behind the club for a ‘Coffin Rock’ session with intense industrial baroque music. Attention ! It’s close to midnight! Please keep your ‘Gremlins’ away from the food to ensure safety and order! The gothic rave continues with a dance off between the ‘Predator’ and ‘Chucky’ the murder puppet! ‘Chucky’ shakes the club up a bit with his 90s french hip hop track, a genre that hasn’t been heard in the EXTIZE universe before! A night so memorable that you will have goosebumps even 28 days later!

Not only is this concept album a sensational tribute to the horror and sci-fi stories from the 80s all the way to the 2000's that frontman Cyb3rella grew up with, but it's also going to be released as a digipak with 3D glasses and 3D booklet to properly take you back in time and make your listening experience even more exciting! As a bonus, EXTIZE is also releasing a collectors edition in the form of a VHS box with an audio cassette version of the album and many goodies from the movies that it's about! As a treat, the band has also added a bonus track to the cassette called ‘Dusk’ inspired by the movie ‘From dusk till dawn’!

A sensational musical horror experience that will even make the skeletons in your closet dance, available everywhere on September the 30th 2022. Surrender to the amazing world of sci-fi and horror but remember: Always be afraid of the monsters… 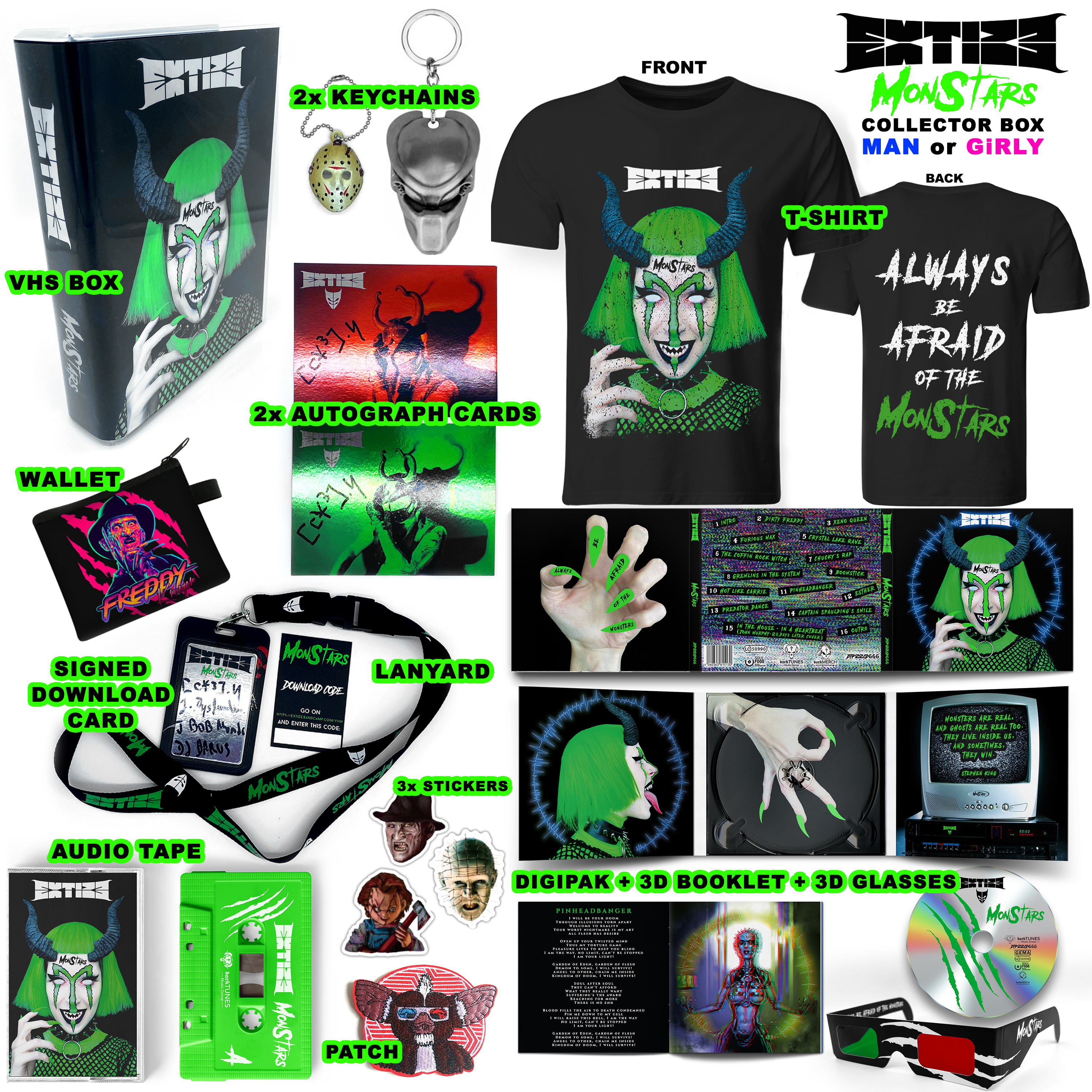